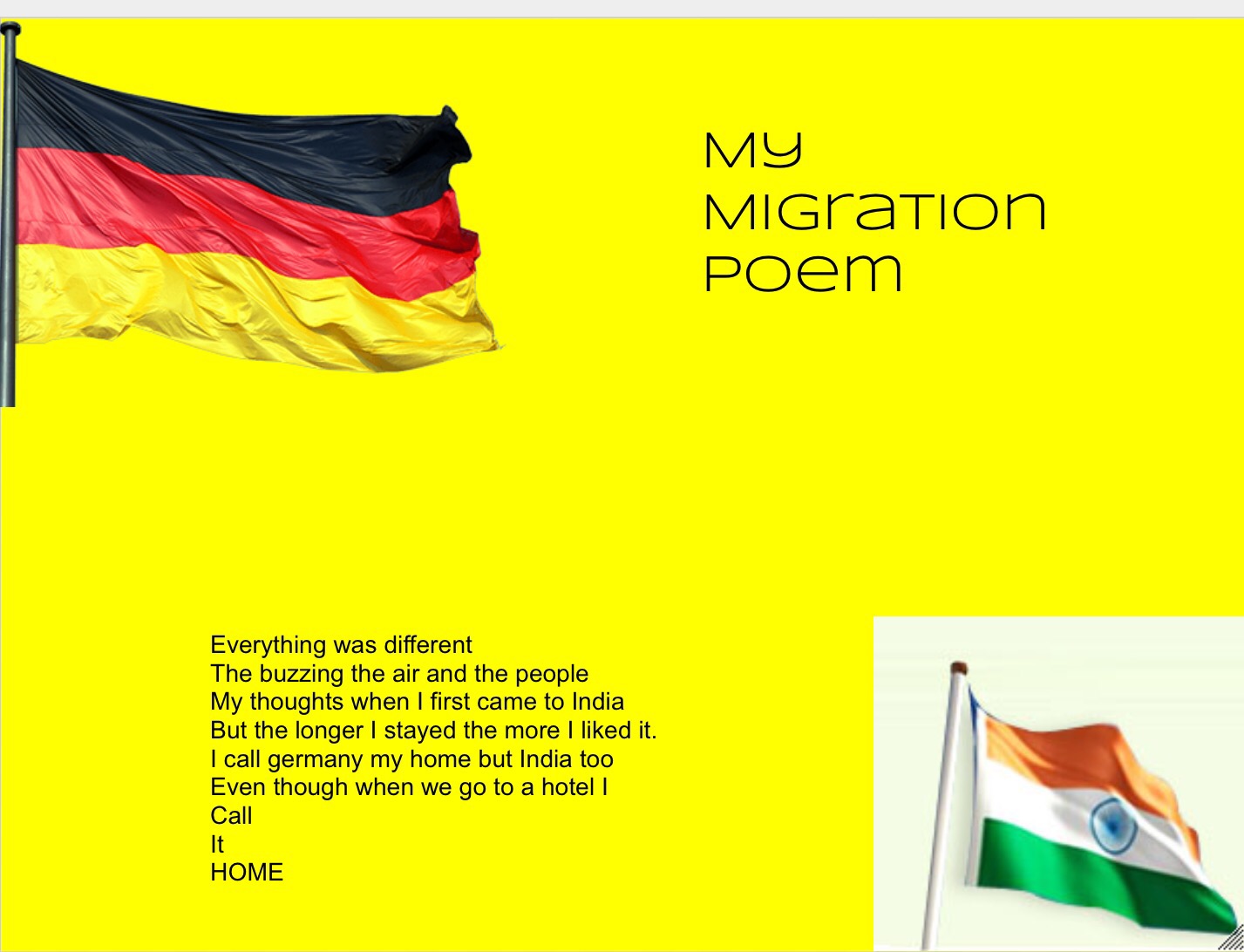 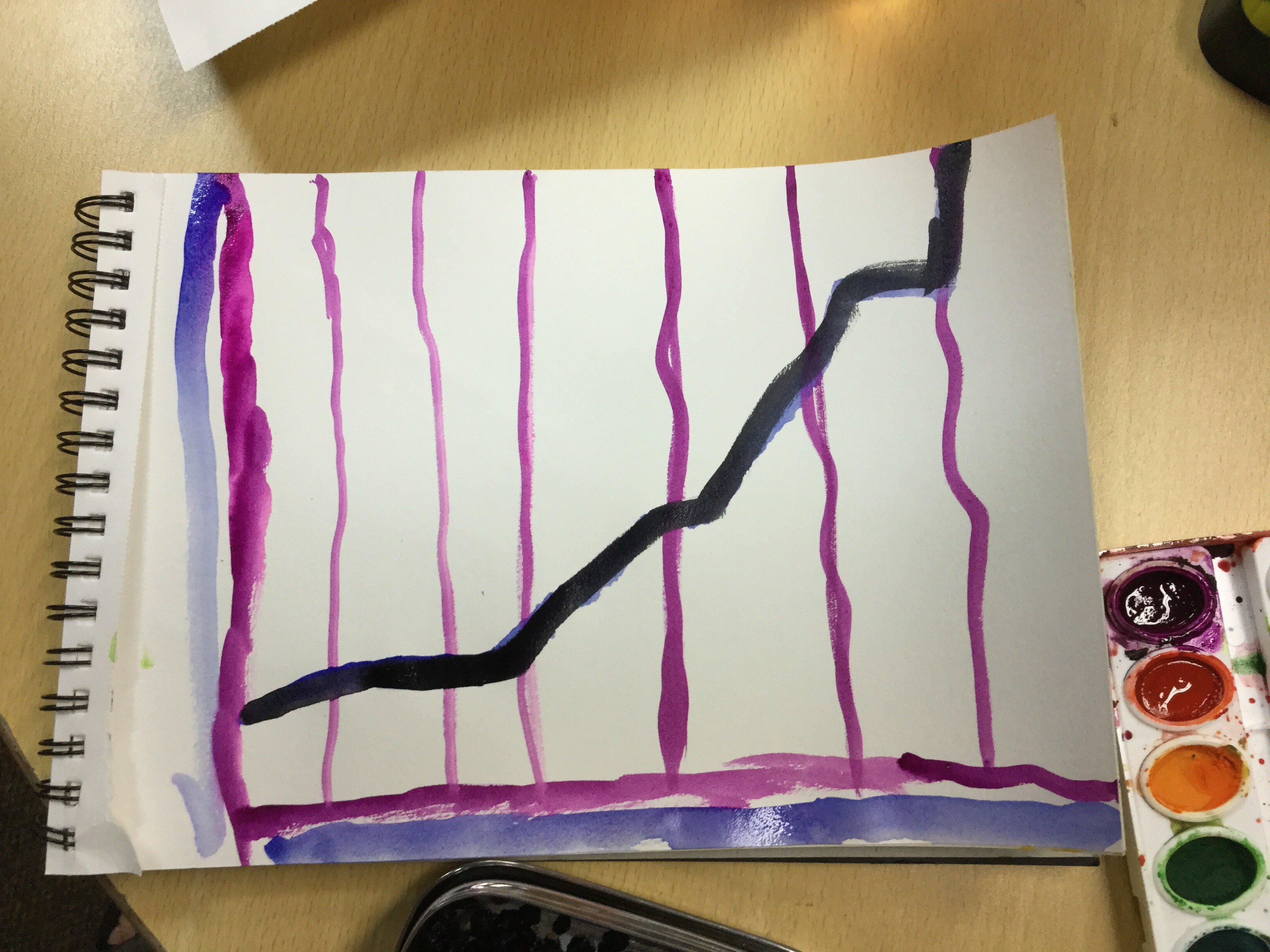 At the end of the year we had a painted reflection journal for our favourite memory of 5th grade. We could also paint a metaphor. I said 5th grade was like grid of how a new factory is going. First everything was new and not to good and towards the end it got better.
Bye bye 5th grade and WordPress for helping me tell my stories. 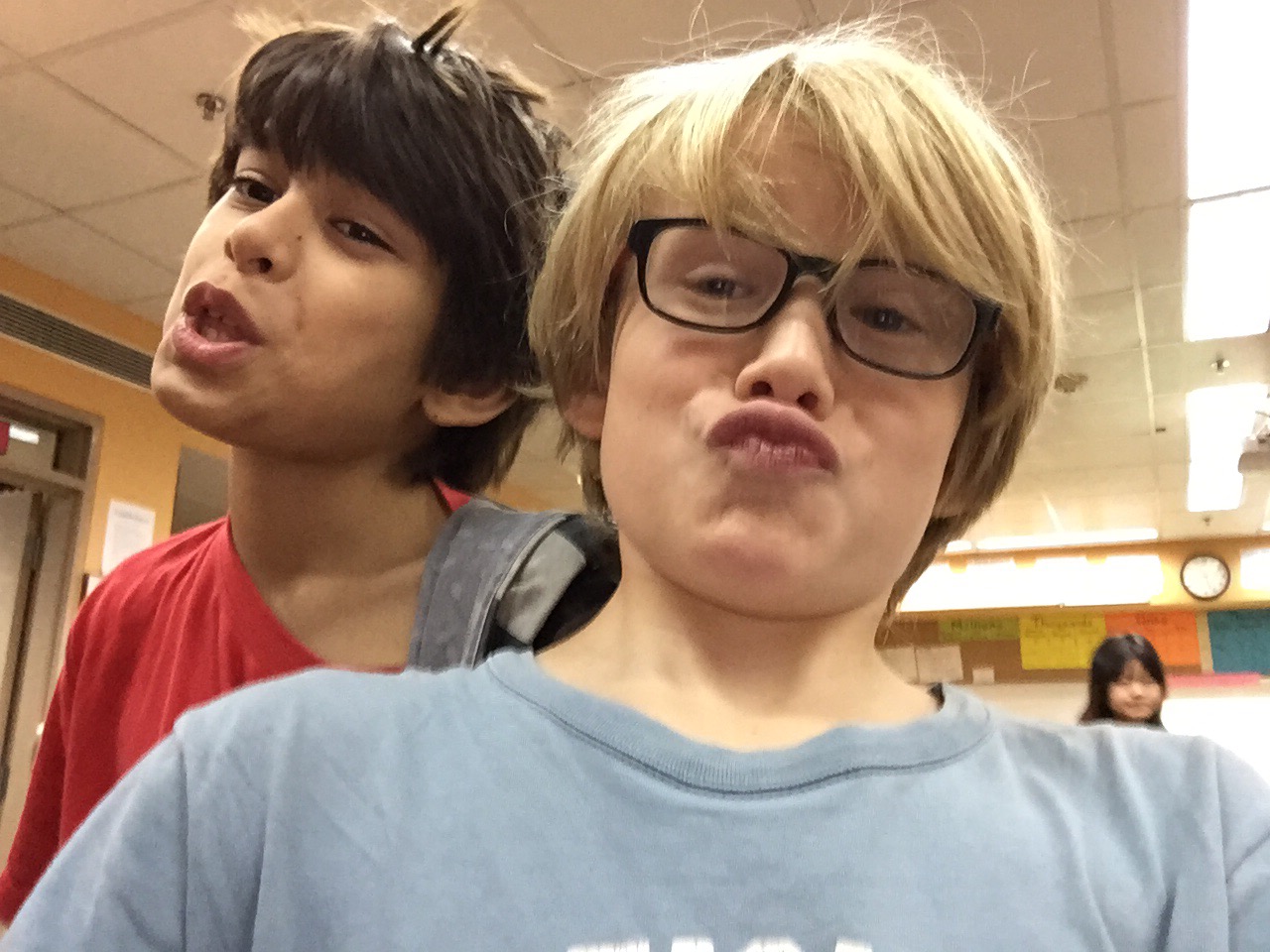 Just in December there was a big story happening around my mom and a syrian Refugee who was pregnant in her 8 and a half month. I don’t know how my mom found out about (I don’t know her name) but she was living in an apartment with another family. Her husband was already in Germany and she wanted to go there too. All i know is that one day she got in touch with my mom. She didn’t want her baby to be born in INdia and I don’t know why. She needed money for a flight and a visa for her to go to germany. There were so many other problems. She Did Not speak english. One day mom and she went to the german embassy to get a visa. First they didn’t want to let them in but eventually they did. Inside the office mom explained what was going on. The woman felt sorry and said, i’m actually not allowed to do this but i’m going to try to get her a visa. See, a lot of people tried to help. That weekend my mom went to Jodhpur to a music festival with a group of friends. Mom told Ayse, one of the friends, the story so far. Also about the one room apartment shared by two families. Ayse immediately said, she can live with us. When mom told me this part, I cried. Later that weekend had to go to the german embassy again but mom wasn’t there. She Had to wait outside untill the lady came out ………..and gave her visa. That Sunday i think flew to Germany. 1 ½ months ago her baby was born.
When people migrate they also change a lot. Not only the language. But also emotional. For example in the video Another Kind of Girl Kaldhya, a girl who loves to film, in Syria was a shy girl, but when she migrated she turned into a courageous girl. She also became a very thoughtful girl.
According to http://peoplemov.in the top destinations for refugees are;
USA

How did you pay for the flight?

My parents did? Did you travel with family?

Yes, my brother and mom. Where did you stay overnight?

There are also lots of other push/pull factors. To find out more about migration go to,
https://m.youtube.com/watch?v=grc47OYBJaE

In French class we did a movie on our Ranthambhore schedule.

I am proud of about that I made everything Ranthambhore because some people didn’t put Ranth. Pictures. I am also proud of my spelling, I made a few mistakes but everything else was good.

I forgot to site my sources and next time I will make sure to do that. I like that I made a perfect day by picking out all the highlights.

I think that for being a digital citizen I did a good job this year so far.

I have lots of responsibility but I can handle them. For my projects I cite sources and use CARP (contrast, alignment,repetition and proximity). My strength is fixing problems on i-pads. I like that this school provides so much technology. I am also responsible with writing my e-mails carefully, not to hurt someone.

What I could work on is not using my I-pad while I’m walking. Right now I want to just do things on there and I don’t look were I’m going.

But other wise I am doing well. 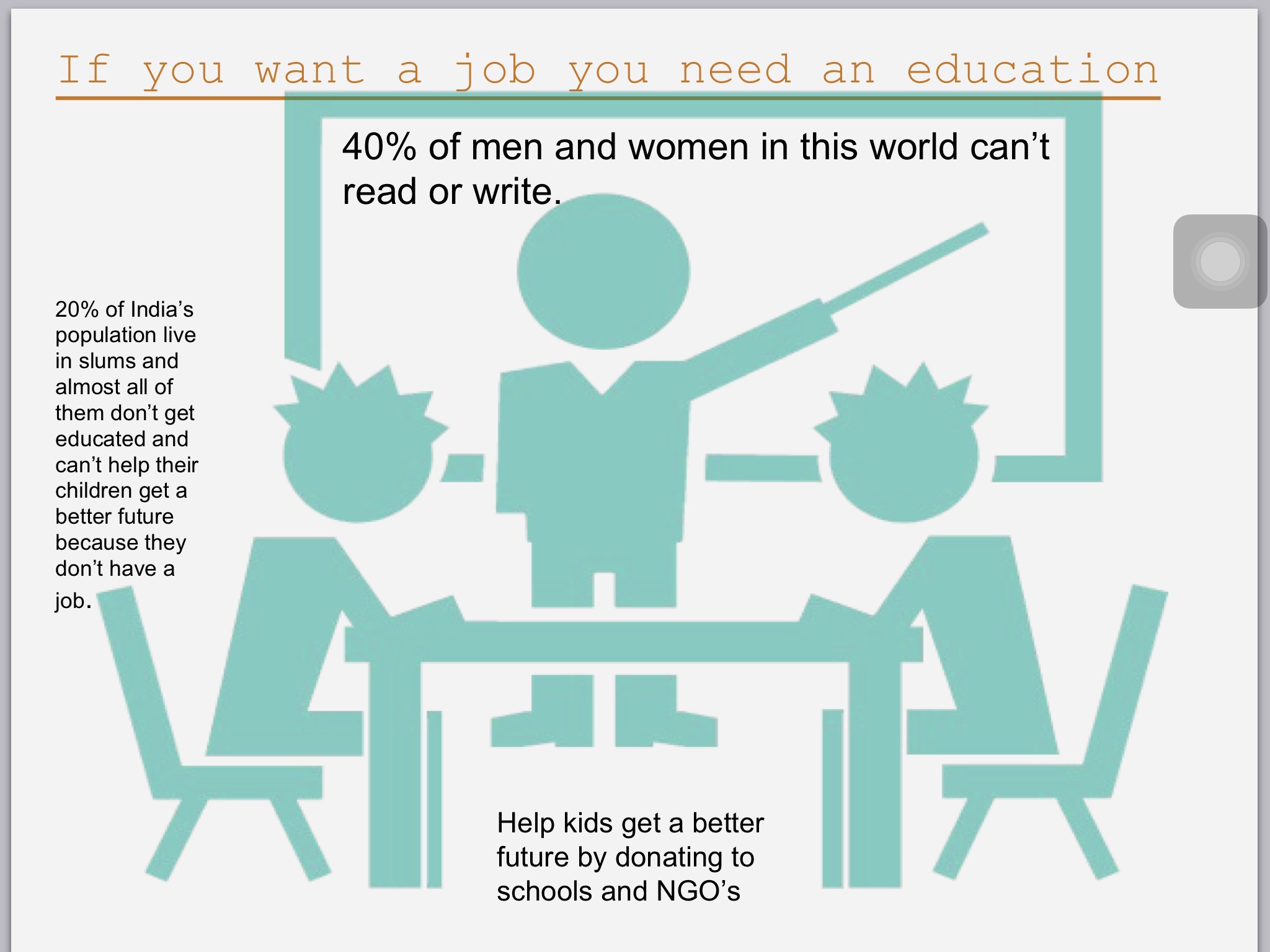 My writing goal is being more focused on what I’m doing.

I noticed that I had less writing than I wanted in most of my pieces. I think this is also because I’m the kind of guy who likes to move around more than sit down.

For example in my fantasy story I planned to do a lot more trials in the path of trials parts but I looked out of the window more than worked.

In the future I want to choose a more independent space to work.

In the beginning of the year we did pendulums in Science. I learned a lot about how it feels to be a scientist. I felt like a real one.

We made pendulums out of: normal string, a pencil, tape and a coin. Then we swung it and saw how many swings it could do in 15 sec. When we were done with one class the next class we would change one variable. Then we did the same thing and compared the results.

I am proud of how much thinking I did about our work. Even though I did most of the thinking in my head I wrote some down on paper.

This was the best science unit ever. I think I could’ve wrote down more of my thoughts down but otherwise I am really proud about how much thinking I did.

My reading goal is still jotting. I noticed that even though I had this goal for a year now, I didn’t work hard enough.

One of the only times when I jotted a lot was in the beginning of the 2016 when we started “A Wrinkle in Time”. But I don’t know why excactly only then.

I think I don’t jot a lot because I read and then I get so caught in my book that I don’t think about jotting down my thinking about it. I think I should set a timer for like 5 or 10 minutes. This would help me remember that I need to jot. I want to have this done by April 1, 2016. 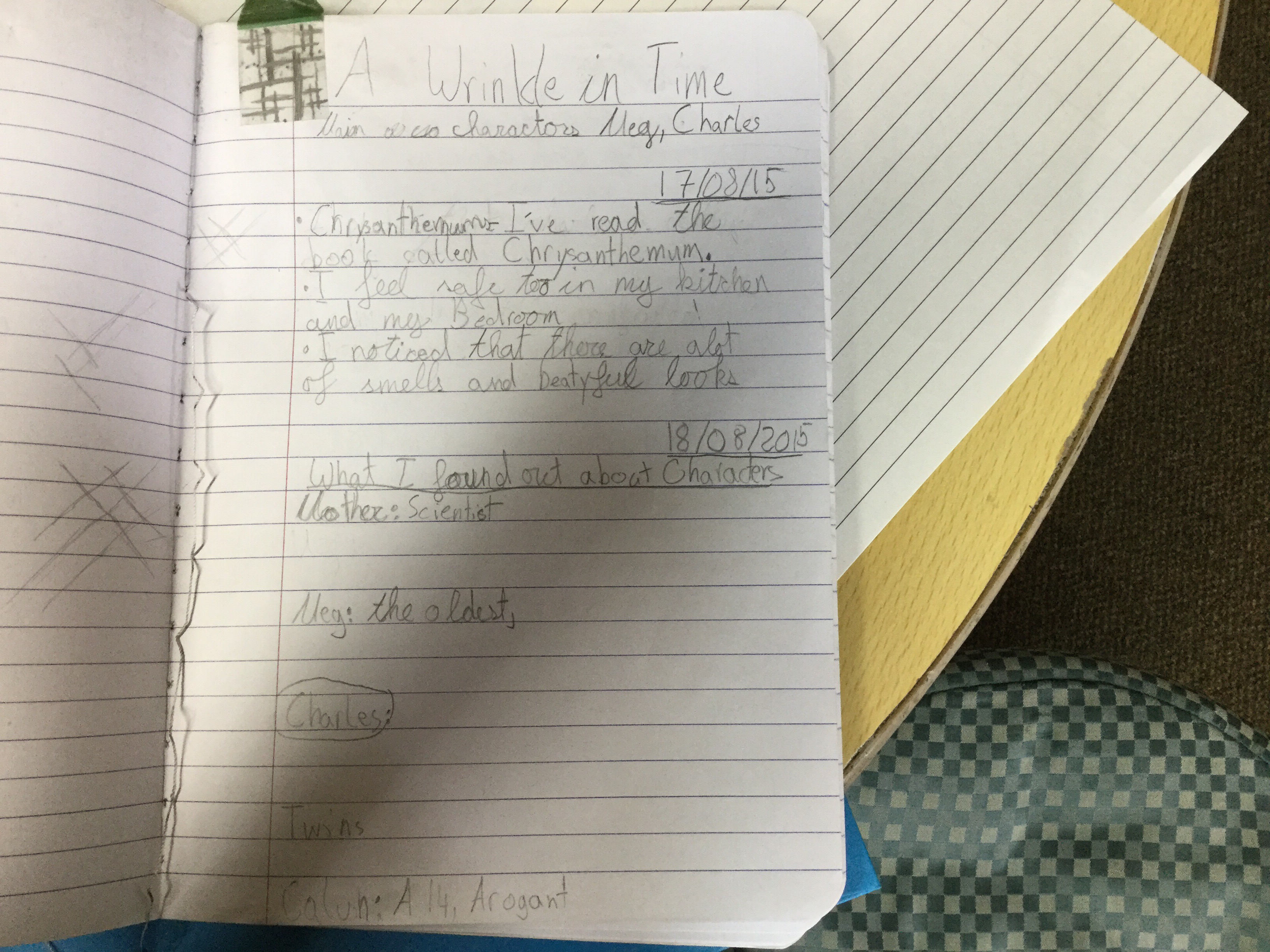 We read the most amazing picture book in the world: “January’s Sparrow” by Patricia Pollaco. I thought about the main idea. You can see your self… 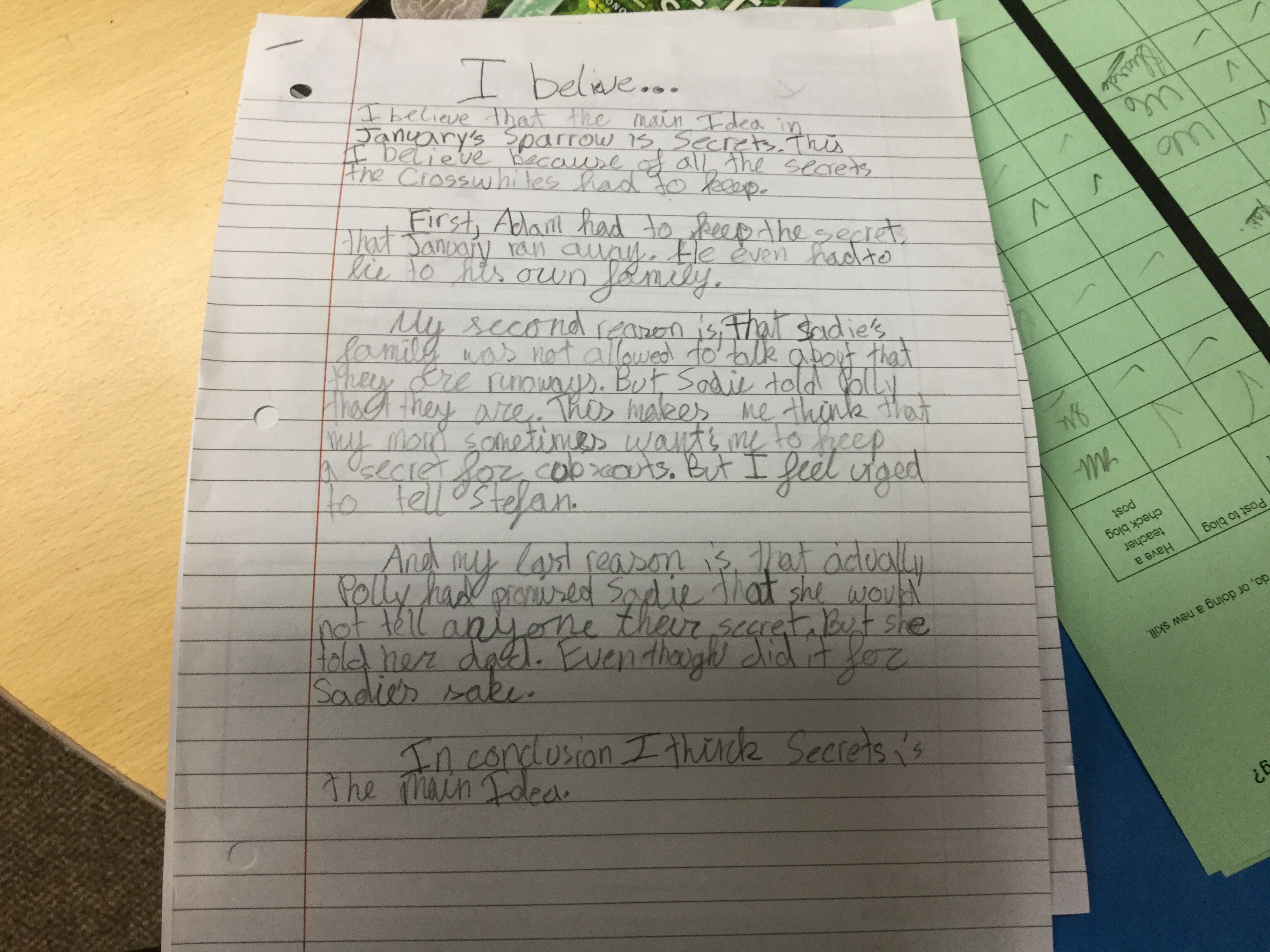 I am proud of my work because I wrote a lot of examples to support my main idea. In other book reviews I would have just written one reason, and done.

I also wrote a connection to my life right now.

I wish I had explained in each paragraph why this example connects to the main idea.

This is my thinking on my “January’s Sparrow” book review.